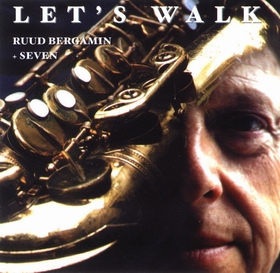 (The result is a variation in style, tempo and sphere which takes more than an hour. The opening tune 'Arboretum' connects the melody from the bandoneon to the beautifil tenorsax solo from Wim Ninaber which becomes more and more intens. The baritone sax from Bergamin in combination with the bandoneon in 'Like a Tango' reminds on Piazolla. Don't Look Back is a composition in between funk and hip hop. Bergamin's music swings (...) in a way that is not dutch.) 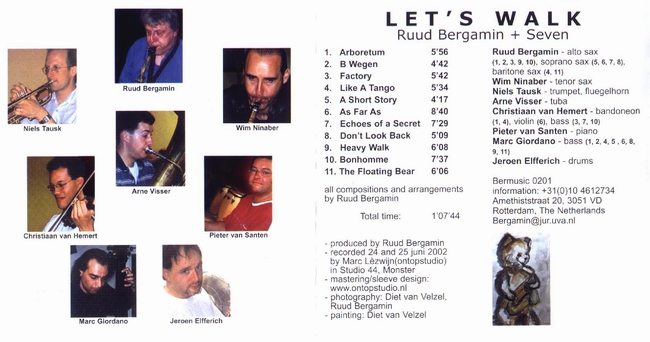 LET'S WALK is a recording project which involves eleven compositions by Ruud Bergamin. Most of these compositions were written during the 1980's and 1990's for special groups or for special occasions. To write music with specific musicians in mind is always inspiring. Ruud's activities as a composer are also widely stimulated by his work as a conductor of jazz workshops. To make the music usable for this CD project, most pieces were rewritten and provided with new arrangements. The use of a tuba in the horn section is a conscious choice, inspired by the work of the great arranger, Gil Evans. The use of a bandoneon in some tunes refers to Ruud's love of tango music.

Ruud Bergamin is a saxophonist, teacher, composer and conductor of jazz workshops and big bands. He performed with many others, among them Roy Campbell, Dick de Graaf, Jos Machtel, James Long and Janice Lakers.

Special thanks to:
Diet van Velzel for encouraging me to do this project, to Wim Ninaber for generating some useful ideas and to the seven musicians for their commitment.

Arboretum was written for a poetry project which involved a poem by Manuel Kneepkens. The song opens with a 'walking-motive' suggesting we go from tree to tree in the arboretum (a garden of trees). A first version of Arboretum was performed by singer Cas de Marez (Caecilia the Marez Oyens) who died in 2000. The performance of the composition on this CD is dedicated to her memory. Here the role of the lead voice is played by Christiaan on the bandoneon. Solos by Wim on tenor sax and Niels on trumpet.
B Wegen is both the name of a composition and of a former jazz group in which Ruud participated in the 1980's. The piece makes use of temporary keys: there is no single tonal centre. There are solos by Ruud on alto sax, Niels on trumpet and Pieter on piano.
A first version of Factory was originally composed as film music for a project in which a number of Rotterdam composers participated writing music for an old (silent) Vertov film, The Man With The Camera. At the time Factory was live performed while the film was on screen. In the movie there is a scene in which you see ladies working in a sewing factory. The intro is played by alto sax and bowed bass (Christiaan is the bass player here). Solos by Ruud, Wim and Christiaan.
Like A Tango contains a dialogue between Christiaan's bandoneon and Ruud's baritone sax. The composition expresses how tango ideas can be combined with a jazz-based idiom. You could call this 'fusion'.
A Short Story is in fact a fast 12-bar blues tune with some unusual chord changes, which give the melody more weight. Solos by Ruud (soprano), Pieter (piano), Wim (tenor) and Marc on bass.
While in pieces like Echoes of A Secret and B Wegen there is much harmonic change and development, in As Far As harmonic development is limited. Thus, the opening part has only one chord (C major 7). Solos by Ruud on soprano sax, Chistiaan on violin, Wim on tenor and Niels on trumpet.
Echoes of A Secret was composed as a reflection on the work of Thelonious Monk. It uses harmonies which sound strange at first, but which are in fact logical. The theme is played as a dialogue between soprano sax and plunger-muted trumpet. The soloists are Ruud on soprano sax and Niels op plunger-muted trumpet. In the coda there is a short solo by Pieter.
The title Don't Look Back says: "let's have a walk and let's look forward". After short solo's of Ruud on soprano and Pieter on piano there is a duet of Wim on tenor and Jeroen on drums, like they did on their own record 'Drum&Tenor'.
Heavy Walk is also a variation on walking. For most jazz musicians it's a heavy walk to reach recognition as artists who have something to say. Solos by Ruud on alto sax, Pieter on piano and Christiaan on bass.
Bonhomme is not a romantic 'ballad' in the normal sense, but a 'slow piece'. The title refers to a place in France, in the mountains of Les Vosges (Alsace), where Ruud happened to be. Solos by Ruud on alto sax and Niels on fluegelhorn.
At the end of the walk we meet a curious phenomenon: The Floating Bear. The tune with that name was composed right after the first recording session. The idea came up to write one more tune featuring Ruud's baritone sax. Solos by Ruud, Wim on tenor sax, Pieter on piano and Marc on bass.